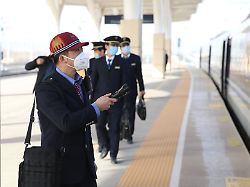 Coronavirus continues to spread rapidly in China, with 1749 new infections yesterday alone. The all-clear for the passengers of the "Diamond Princess", for whom the cruise ship had become a prison in the past two weeks, is meanwhile being brought to the mainland.
In China, more than 2,000 people have now died from the novel corona virus, according to official figures. The Health Commission in Beijing announced on Wednesday that the death toll had increased by 136 compared to the previous day to 2004. The detected infections climbed around 1749 to 74,185 cases. In Japan, passengers of the "Diamond Princess" are allowed to leave the cruise ship after two weeks of quarantine. In the particularly severely affected Chinese province of Hubei alone, 132 new deaths and 1693 new infections with the lung disease called Covid-19, which is triggered by the virus, were added from Beijing. So far, five deaths and almost 1,000 infections with the pathogen Sars-CoV-2 have been detected outside the Chinese mainland, 16 of them in Germany. According to local media reports, a sixth officially unconfirmed death has now occurred in Hong Kong, and the number of physicians who have been infected with the pathogen since the onset of the disease has also increased. According to a study by the Chinese health authority, at least 3,000 doctors and hospital staff have been infected so far. Previously, only 1,700 illnesses had been known, and at least six helpers had died by the end of last week, according to state television CCTV. Most of the victims were therefore in the particularly severely affected province of Hubei, in whose capital Wuhan the virus had broken out. Cruise passengers are allowed to leave the ship The Diamond Princess had become a prison for travelers for two weeks. (Photo: REUTERS) In Japan, the first passengers previously quarantined have disembarked from the cruise ship "Diamond Princess". The disembarkation of around 3,000 people on board will take at least three days, the government said in Tokyo. As the first group, around 500 mainly older passengers are expected to leave the ship. They were tested negative for the pathogen and finally questioned by doctors on board. The Japanese news agency Kyodo reported that they would be taken to downtown Yokohama or to other train stations in the Tokyo metropolitan area. Buses opened up in front of the ship. By the previous day, the number of passengers and crew members tested positive for Sars-CoV-2 had increased to 542 cases. All concerned were taken to local hospitals. In the meantime, all people on board have been tested, it said. Initially there were around 3,700 people on board the "Diamond Princess", including ten German citizens. A German couple was later tested positive for the pathogen. The reason for the two-week quarantine was an 80-year-old from Hong Kong who had tested positive for the corona virus. The senior had boarded the Yokohama on January 20 and disembarked the cruise ship in Hong Kong five days later. The first returns to Germany were from the Westerdam cruise ship in Cambodia: two Brandenburgers returned home on Tuesday. Both have no symptoms and are in domestic isolation, as the Brandenburg Ministry of Health announced. A 83-year-old "Westerdam" passenger from the USA had been found to have Sars-CoV-2 onward in Malaysia. It was unclear where the Hong Kong woman got infected. Other of the ship's 57 German passengers were still waiting in Cambodia for their onward journey.