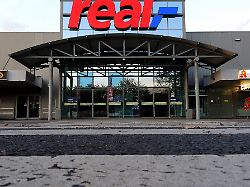 Metro sealed the sale of the lossy Real subsidiary. The contracts are signed, the Düsseldorf-based retail group announced. The majority of the 276 real stores are to continue to operate, but not in the previous form.
After months of tug of war, the retail group Metro has finally sealed the sale of its ailing Real supermarket chain. The financial investor SCP has agreed with Metro AG on a 100 percent takeover of Real, according to a joint announcement by the two companies on Tuesday evening in Düsseldorf. According to this, a large part of the Real locations will "continue to operate in the long term, either under the Real brand or through other retailers". The contract is still subject to approval by the Russian Sistema PJSFC, which will fund the acquisition. Sistema says it will make available up to EUR 263 million for this. According to its own announcement, Metro expects a net cash inflow of EUR 0.3 billion. That is around 200 million euros less than was hoped a few months ago. The transaction also requires the approval of the antitrust authorities. With the contract, the supermarket chain with 276 Real stores, 34,000 employees, 80 properties and the online shop real.de is effectively on the verge of being dismantled. SCP announced that the majority of today's Real stores should be sold or split up to other retailers. A core of around 50 Real stores will continue to operate under the Real brand for 24 months. So far, according to the communication, SCP assumes that around 30 locations will be closed. The supermarket chain was most recently the problem child of the Düsseldorf-based retail giant and had provided deep red numbers for the Metro in the 2018/19 financial year. Customers prefer to buy on-site Metro 4.91 Germany. Customers increasingly left the hypermarkets behind and preferred to buy in supermarkets and discounters in their neighborhoods. Metro had already announced in 2018 that it would sell the supermarket chain in order to be able to concentrate entirely on the wholesale business with restaurateurs and small retailers. But the sales process turned out to be much more difficult than expected. Exclusive negotiations with the real estate investor Redos, which started with high hopes, failed. An agreement was only reached in the second attempt, and sales efforts were made difficult not least by the high concentration in the German food trade. Edeka, Rewe, Aldi and the Schwarz group with their discounter Lidl already dominate the German market so much that the planned resale of numerous real markets to the "big four" is viewed with concern by the competition watchdogs.