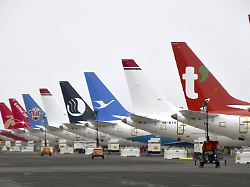 Hundreds of 737 Max aircraft are waiting for delivery. But during the idle time a new problem arises: in some fuel tanks there are things that do not belong there.
The ailing US aviation group Boeing encountered a new problem with its crisis jet 737 Max, which was banned from flying after two crashes. During the maintenance work, foreign bodies were found in the fuel tanks of some machines that are currently being temporarily stored, Boeing announced on Tuesday (local time). This led to a comprehensive internal investigation and immediate corrections in the production system. Boeing had produced numerous 737 Max jets on stockpiles that could not be delivered due to the flight ban. However, despite the inspections that have now been announced, the group continues to expect the 737 Max to be approved for flight operations again in the middle of the year. The best-selling aircraft type of the American Airbus rival has not been allowed to take off since mid-March 2019 due to the crashes with a total of 346 deaths. Boeing wanted to have solved this problem long ago by means of a software update, but the approval from the regulatory authorities is still not available in the fuel tanks of the intermediate aircraft as "absolutely unacceptable". Boeing's Renton facility near Seattle has already introduced new workflows with updated instructions and additional checks to address the problem. The parts found were referred to as "foreign object debris" – therefore it could be rubbish such as remnants of components or tools left behind by workers. In the past, Boeing had had this problem with other models such as the tanker aircraft KC-46. For example, the "New York Times" reported security risks at the Boeing plant in North Charleston, and foreign bodies were said to have been found on planes. For example, metal shavings were not properly removed and defective parts were installed in the planes. The newspaper cited hundreds of pages of internal email, company documents, government documents, and interviews with over a dozen employees. At the time, Boeing had firmly rejected the allegations.