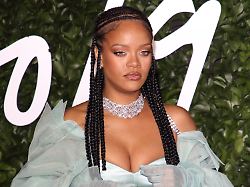 Their love remains in a hopeless place: Rihanna and Hassan Jameel are no longer a couple, media reports. The singer and the Saudi businessman had had a secret relationship.
The relationship between pop icon Rihanna and Saudi businessman Hassan Jameel appears to have ended after around three years. Us Weekly reports, citing an unspecified source. "TMZ" also confirmed the reports, citing informants. There have been rumors of a relationship between Rihanna and Jameel since summer 2017, but the two kept their relationship private. At most at airports or at home games of the Los Angeles Lakers, the public got to see the two 31-year-olds together. Only in a conversation with the magazine "Interview" did they admit publicly in the summer of 2019, into the person you can "google" "to be in love and to want to be a mother" more than anything else in life. Also in the summer of 2019, Rihanna moved to London, where Jameel lives, and the fortune of the Barbados-born singer, who was born Robyn Rihanna Fenty, is estimated at $ 600 million. In addition to her music, the 31-year-old celebrates global success with her luxury brand Fenty. It was only in December that she received an Urban Luxe award at the British Fashion Awards in London, which honors innovative brands.