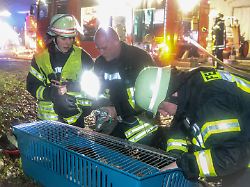 A fire in a pet shop is fatal for many animals. Many rabbits, hamsters and guinea pigs cannot escape the flames because part of the building burns out completely.
Numerous animals were killed in a fire in a pet shop in Remscheid in North Rhine-Westphalia. A "larger number" of small animals such as rabbits, hamsters, guinea pigs, mice and rats and birds died from smoke poisoning, as a spokesman for the fire department said. At first he could not say how many animals died in the fire on Saturday evening. The cause of the fire was still unclear in the morning, and several rabbits, guinea pigs and mice could still be saved. They were supplied with oxygen and soothed by the emergency services, examined by veterinarians and ultimately initially housed privately. The aquarium of the pet shop remained intact and the fire brigade set up an emergency power supply to ensure the oxygen supply from the aquarium pumps. When the fire department arrived, the pet shop was completely smoky, said the spokesman. Flames had already penetrated parts of the roof, windows were broken. Part of the building complex, which was used as a cash register and storage room, burned out completely, and whether the building can still be used must be checked in daylight, the spokesman said. 60 firefighters were on duty from Saturday evening to late at night. In a Facebook post, the city of Remscheid said in the late evening that it had learned of the fire "with great horror".