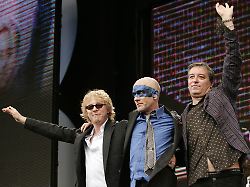 Donald Trump repeatedly plays copyrighted songs at his campaign events. The US President also uses songs by R.E.M., much to the band's displeasure. The three musicians now want to stop the repeat offender.
R.e.m. plan legal action against U.S. President Donald Trump. The reason: Trump repeatedly plays copyright-protected songs of the band at his campaign events – without having obtained permission beforehand. After the incumbent president used the REM titles "Everybody Hurts" and "Losing My Religion" at an event in Milwaukee last Tuesday, REM bassist Mike Mills announced on Twitter, legal To consider consequences. "We are aware that President Trump continues to use our music at his rallies," Mills writes. "We are investigating all legal ways to prevent this from happening, but if that is not possible, please be aware that we will not tolerate the use of our music by this fraud and swindler." Trump repeat offender It is not the first time that Trump the music from REM used without their permission. Shortly after announcing his presidential bid in 2015, the band issued a legal warning for their song "It's the End of the World As We Know It (And I Feel Fine)". "Fuck yourself – you sad, attention-grabbing, power-hungry little men. Don't use our music or my voice for your debatable charade of a campaign," said the band's former singer, Michael Stipe, at that time on Mills' Twitter account known. In February of last year, Trump also used the R.E.M. title "Everybody Hurts" for a Twitter video by mocking his democratic opponents. Various other artists have also banned the US President from using their songs, including the Rolling Stones ("You Can't Always Get What You Want"), Neil Young ("Rockin 'in the Free World"), and Adele ("Rolling in the Deep "), Rihanna (" Don't Stop The Music ") and Pharrell Williams (" Happy ").