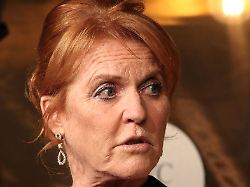 In the scandal surrounding multi-millionaire Jeffrey Epstein, Prince Andrew is also accused of abusing a minor. The British Royal is now receiving support from his ex-wife Fergie. In an interview she describes the son of the Queen as a "wonderful man".
The ex-wife of British Prince Andrew, Fergie, continues to hold on to her former husband, even though he's involved in the abuse scandal surrounding American multimillionaire Jeffrey Epstein. She and her children Beatrice and Eugenie also suffered under pressure, Fergie told Vogue Arabia magazine. "The last six months have been tough for me and the girls," said the 60-year-old, who is actually called Sarah and is Duchess of York. "Watching what such a wonderful man has to endure … He is the best man I know." Fergie was married to Prince Andrew from 1986 to 1996. American Virginia Giuffre accuses Prince Andrew of having abused her twice as a minor nearly 20 years ago. Giuffre was one of the victims of Jeffrey Epstein, who committed suicide in prison in August. He was accused of abusing and forcing dozens of minors into prostitution. Prince Andrew was friends with Epstein and often visited him. Andrew denied the allegations of abuse. After a completely failed interview, with which he actually wanted to restore his ailing reputation, the prince decided to let his duties as a member of the royal family for now rest.