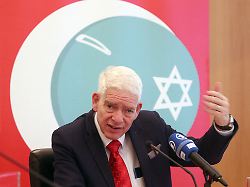 The unrest in the Jewish community in Germany is growing. According to the publicist Friedman, the President of the Central Council of Jews in Germany speaks openly about emigrating. Like Friedman, Schuster draws the line for government participation by the AfD.
The growing hatred of Jews in Germany is not without consequences for the life plans of prominent Jews. According to the publicist Michel Friedman, the President of the Central Council of Jews in Germany, Josef Schuster, also deals publicly with the issue of emigration. He wanted to leave Germany if the AfD co-governed, said Schuster after a report by the editorial network Germany (RND) at a meeting of the CDU / CSU parliamentary group on November 25th. Attendees told the RND of what the President of the Central Council said, and Schuster said at the meeting that there was unrest in the Jewish community due to increasing anti-Semitism. On such occasions he always said that Jews could live in Germany, that they were safe here and should not be unsettled. However, the 65-year-old added: "If there were coalitions with the AfD, I would also have to say: Now it's time to leave Germany." This would remove the ground on which Jewish life in Germany was possible. Minister of Culture Monika Grütters replied according to the participants: "I can assure you: there is no one here in the room who thinks about this." There was applause. Overall, the conversation with the Union faction went smoothly, it is said. Central Council President Schuster and Michel Friedman in May at the award ceremony of the Leo Baeck Prize in Berlin. (Photo: picture alliance / dpa) Friedman had made similar comments in an interview with the "Frankfurter Allgemeine Zeitung". When asked when the moment was to flee, Friedman said: "I often asked myself that question. And it is so painful to this day that many simply did not leave in time in the 1930s." After the National Socialists seized power, Jews from Berlin or Munich would have pushed out the signs of the times because they would have identified further with society. However, Friedman told the paper that he himself could imagine going. "I have defined a limit for myself: if the AfD were in a federal government, I would go." The former member of the CDU federal executive board described the AfD as "racist, anti-democratic, disregarding people and democracy. AfD politicians have to take this into account to let". Friedman added, "A clear and unambiguous distinction is imperative".