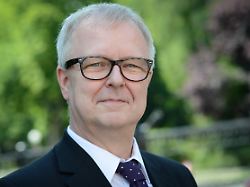 He was faithful to Wolfgang Wagner and his daughter Katharina too. Now the longtime spokesman for the Bayreuth Festival, Peter Emmerich, has died unexpectedly.
The longtime spokesman for the Bayreuth Festival, Peter Emmerich, is dead. He died unexpectedly at the age of 61, as Festival Director Katharina Wagner said. "I'm totally shocked, unbelievable, I'm missing the words." Emmerich was found dead in his apartment, Wagner said. That's what his former wife told her. "Peter Emmerich lived for the festival," the Festival's chief praised him. "It's bad to be able to say goodbye." From Dresden to Bayreuth For three decades, Emmerich shaped the public relations work of the Richard Wagner Festival. The legendary Festival Patriarch Wolfgang Wagner had brought him from Dresden to Bayreuth in 1989 – a few months before the change of regime. As a result, Emmerich was the contact person for journalists all over the world and a close associate of the festival's management. "The Gray Eminence on the Green Hill," media called him. He was respected and feared alike. For the way to the festival management or to interviews with the artists of Bayreuth always led to him. He himself seemed to be completely absorbed in his role. "Tatort" sets a monument to Emmerich It was not long ago that the ARD Franconian "Tatort" set a small monument for him. The crime thriller "A day like everyone else", broadcast on February 24 of this year, played in part at the Bayreuth Festival Theater. Emmerich stepped in front of the curtain in a "Valkyrie" demonstration and asked the audience to leave the opera house because of an attack in a box. The "Nordbayerische Kurier" quoted from the message published by the Festival at Emmerich's start of work 30 years ago: "The theater scientist Emmerich, a member of the Dresden State Opera and assistant director until now, is now working at the Bayreuth Festival as a personal artistic and scientific assistant to the festival management with a focus on media and program editing. Wolfgang Wagner was able to work on the Semper Opera from Convincing Mr. Emmerich's qualification. "Stasi scandal In 2010, years later, Emmerich even survived a tangible Stasi scandal: in 2010, it became known that in the late 1970s, as a young man, he had spent some time as an unofficial Stasi employee. He acted as a 20-year-old in a climate of fear, he explained at the time the dpa. "You have to take into account the conditions in the GDR, everyone spied on everyone, I was not a hero." Katharina Wagner decided to stand behind her press boss.