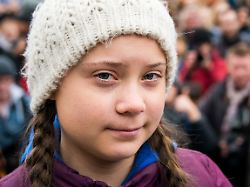 Four personalities, united in the fight for the world, awarded the Right Livelihood Foundation with the Alternative Nobel Prize this year. "Gandhi of Western Sahara" and "Jeanne d'Arc" of the climate are two of the winners.
In the absence of climate activist Greta Thunberg and another laureate, the winners of this year's Alternative Nobel Prizes have been awarded in Stockholm. While Thunberg and Chinese women's rights activist Guo Jianmei were absent at the awards ceremony in Stockholm's Cirkus event venue, human rights activist Aminatu Haidar from Western Sahara and Brazilian native Davi Kopenawa personally presented their prizes Wednesday night. Haidar is the first winner from Western Sahara ever. Guo Jianmei could not come to Stockholm for reasons not mentioned above. Thunberg was still in Lisbon after her return trip across the Atlantic, which is why two activists from Fridays for Future Sweden accepted the award for her. Thunberg himself thanked him by video message after being announced by the director of the Potsdam Institute for Climate Impact Research (PIK), Johan Rockström, as "Joan of Arc" of the climate. The award was a great honor, Thunberg said afterwards by video from Lisbon. The fight goes on, we will never stop. "The motives for the award range from the fight for the climate and biodiversity to the commitment to justice and the rights of women. The Right Livelihood Foundation described the four prizewinners announced in September as "four practical visionaries whose efforts will allow millions of people to defend their fundamental rights and fight for a worthwhile future on this planet." "Gandhi of Western Sahara" human rights activist Aminatu Haidar , "Gandhi of Western Sahara". (Photo: picture alliance / dpa) Haidar has been fighting for decades for justice and self-determination of the people of Western Sahara and independence for their homeland. That earned her the epithet "Gandhi of Western Sahara". "This is in fact a tribute to my people's struggle for freedom and independence, but also a tribute to human dignity and the principles and values ​​of people and peoples," she said at the awards ceremony, to which later on the 2014 with the Award-winning US whistleblower Edward Snowden from Moscow was added. He said that politics was increasingly about what was legal – not what was morally right. Kopenawa was awarded the Alternative Nobel Prize along with Hutukara Yanomami, a co-founder of the association, with which he supports land rights and indigenous culture but also fighting for the protection of forests and biodiversity in the Amazon. "I get this award because I'm a defender of the forest," Kopenawa said in his acceptance speech. He denounced that the Brazilian government threatened the Yanomami's habitat. "Gold diggers invade our country and destroy it." The Right Livelihood Award, commonly known as the Alternative Nobel Prize, has been awarded for the 40th time since 1980, and this time for the second time. The donation-financed prize is at a critical distance from traditional Nobel prizes. The prize money of one million Swedish crowns (around 95,000 euros) is intended for the work of the honorees.