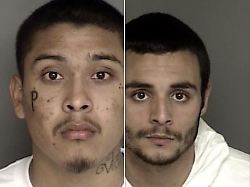 It sounds like a movie: Two men, both suspected of murder, break out of a California prison and are now on the run. The police now want to track down the dangerous men with the help of a large publicity investigation.
In Monterey County, two suspected men broke out of a prison early Sunday morning. The police are now using the public to search for Santos Samuel Fonseca and Jonathan Salazar, as CNN reports. How the two escaped from prison, the police have not disclosed. The Monterey County sheriff's office has published pictures of 21- and 20-year-olds to help them find them. On it are two dark-haired young men with brown eyes. Jonathan Salazar also has a flashy tattoo on his face. A P is tattooed on his right cheek. He also wears lettering on his neck. These particularities may help in the search for the murder suspects. The inmates are suspicious in various murder cases. They were both in custody since last year. Fonseca was charged with several murders, Salazar reportedly shot a man in October 2017 in front of his son. The population is called by means of a Facebook post to look for the wanted men. On pertinent evidence of its seizure, a reward of $ 5,000 was expended. The authorities warn citizens against addressing them. The search for the fugitive suspects continues.