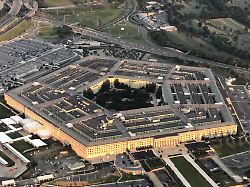 The Pentagon wants to modernize its computer infrastructure, the contract is up to ten billion dollars. The contract gets Microsoft. Partner Amazon believes US President Trump has influenced the decision and filed a lawsuit.
Internet corporation Amazon has filed a lawsuit against the US Department of Defense's decision to award a $ 10 billion Jedi deal to rival Microsoft. Amazon had been considered a favorite in the tender process, until Microsoft was declared the surprise winner. Amazon then spoke of political influence. In the complaint, the company cites negative comments by US President Donald Trump against Amazon. Trump has long had a feud with Amazon founder Jeff Bezos. As reported by the Washington Post, Amazon wants to use four videos as evidence, including one by Trump at a February 2016 election campaign and a talk with Fox News moderator who asked him to stop the Pentagon from awarding the contract to the online retailer. Defense Minister Mark Esper had rejected the accusation last week. The Jedi mission, announced in March 2018, is designed to modernize the Pentagon's computing infrastructure and be managed by a commercial technology company. Above all, a secure cloud for the Pentagon should be created. Amazon is the leader in commercial cloud computing, holding 48 percent of the market, according to market research firm Gartner. Microsoft is the second largest provider with a share of 15.5 percent.