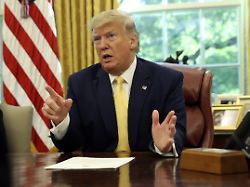 With the withdrawal of their troops from northern Syria, the US is paving the way for a Turkish offensive against the Kurdish militias. In the course of the fighting, hundreds of IS supporters escape from Kurdish camps. US President Trump suspected behind the outbreak of a bad game of the Kurds.
US President Donald Trump has accused the Kurds fighting in northern Syria of trying to drag the US into conflict with Turkey with the release of Islamic State (IS) terrorists. The "Kurds could release some to get us involved," Trump tweeted. But IS fighters could be "easily" captured by Turkey or the European states from which they came – but they should hurry, wrote the US president. The Syrian Democratic Forces (SDF), led by the Kurdish militia YPG, were an important ally of the United States in the fight against IS. The US had withdrawn about 50 soldiers from the immediate area just before the start of the offensive of Turkey, which is directed against the YPG militia. With this step, Trump cleared the way for the mission. At the weekend, he also ordered that the withdrawal of about 1,000 soldiers from northern Syria should be started.Defense Minister Mark Esper explained this with the concern that US soldiers could get caught between the fronts. Trump defended his decision to withdraw troops again. "Do people really believe that we should go to war against NATO member Turkey?" He tweeted. The US government is pushing for the termination of the Turkish offensive and has repeatedly warned the NATO partner. "Big sanctions against Turkey are coming!", Trump tweeted. The SDF have captured thousands of IS fighters in some improvised prisons. According to the Kurdistan Authority and the Syrian Observatory for Human Rights in London, 780 IS supporters have escaped from a camp in the course of fighting between Turkish troops and Kurdish militias. Turkish President Recep Tayyip Erdogan spoke of "disinformation".